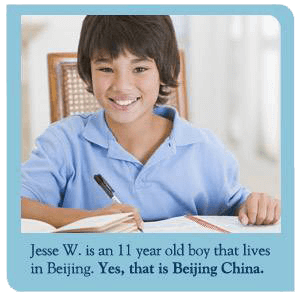 Between the ages of 9 and 11 his prescription more than doubled, going from -3.0 to -6.5, with no credible prediction of how much worse it would get. Jesse and his parents sought the help of Corneal Reshaping Therapy practitioners in Chinese hospitals but were told that Jesse’s prescription was beyond the range that they were able to correct in China.

Jesse’s parents were worried about increasing myopia, and what could be done to control it, but were at a loss, not knowing where to turn. Fortunately, Jesse has a cousin that resides in San Diego, CA, that had been fit with CRT lenses by Dr. Reeder 5 years earlier. After inquiring further, Jesse’s parents found that by using newer designs that can fit higher prescriptions, CRT at Carmel Mountain Vision Care could be the answer they were looking for to control Jesse’s prescription and stop it from getting worse. They felt confident after learning that Dr. Reeder had been one of the FDA investigators into CRT back in the year 2000, and decided to arrange a 6-week visit to San Diego for the summer. 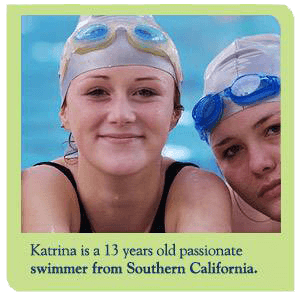 Swimming is Katrina’s passion and occupies an important place in her life. Katrina competes as part of a team in swimming meets, and needs to be able to see in the water for some distance, whether it be to see signals from her coach or her time on the clock. In just a one year span, Katrina’s prescription declined from -1.0 to -3.0.

She noticed that she could no longer see clearly, and felt this was compromising her performance in the water and affecting her ability to improve as a swimmer. She and her parents were concerned that there could be further increases in her nearsightedness.

Although she did not live in the immediate neighborhood, her parents drove her to see Dr. Reeder, after hearing about Corneal Reshaping Therapy at Carmel Mountain Vision Care. They were very drawn to the prospect of CRT because Katrina would be able to see clearly and maintain a stable prescription without needing to wear glasses or any type of correction during the day. Within less than a week of starting treatment, Katrina had 20/20 vision and was really excited after concerns that her passion for swimming was in jeopardy.

CRT not only halted Katrina’s decline in vision, but it enabled her to continue to pursue her passion and to do what she loves.